K+ontrol is a novel potassium binding sorbent in advanced development that was designed to treat cases of moderate to severe hyperkalemia where dialysis is not available.

HYPERKALEMIA IS A POTENTIALLY FATAL COMPLICATION OF SEVERE TISSUE INJURY 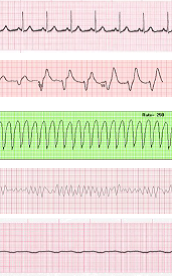 Severe trauma and rhabdomyolysis, burn injury, kidney disease, ischemia, tumor lysis syndrome, radiation, chemotherapy, and drug interactions are all common causes of a life-threatening complication called severe hyperkalemia. Hyperkalemia is defined as the excessive concentration of potassium (K+) in the blood and has been observed in 1-10% of all hospitalized patients.1-3  Potassium is an important electrolyte in the body that is present inside cells at high concentrations, with the amount in blood tightly regulated. Following serious injury to cells by the conditions mentioned above, such cells can continuously leak high levels of potassium into the blood, resulting in hyperkalemia. The kidneys normally excrete excess potassium from the blood, but when overburdened or compromised, as in critically-ill patients suffering from kidney failure, the levels of blood potassium can rapidly rise unabated. Moderate to severe hyperkalemia (K+ > 6.0 mEq/L) can rapidly result in dangerous cardiac arrhythmias and sudden cardiac death. Hyperkalemia and acute kidney injury (AKI) have been long recognized as a deadly combination.

SEVERE HYPERKALEMIA IS A MEDICAL EMERGENCY THAT MUST BE TREATED

Even with treatment, the in-hospital mortality rate for severe hyperkalemia can exceed 30% in critically-ill patients.4,5  Aggressive hydration using intravenous fluids can promote some renal potassium clearance, but it is not very efficient and requires functioning kidneys to work. Shifting potassium into the intracellular compartment using insulin and glucose is another temporizing strategy, but is not a long-term solution. Oral potassium binders such as Kayexelate and Veltassa are not indicated for the primary treatment of severe hyperkalemia due to slow removal. Hemodialysis remains the definitive treatment for hyperkalemia, but is relatively slow and resource intensive. There is a need for a simpler, more rapid, and more robust treatment for hyperkalemia.

CytoSorbents has collaborated with leading military researchers to develop a novel, hemocompatible potassium binding sorbent called K+ontrol to treat moderate to severe hyperkalemia. This sorbent, which is under advanced development, leverages the massive surface area of the company’s existing hemocompatible porous polymers with robust potassium binding technology to target rapid and sustained potassium reduction. The sorbent can be implemented in a wide variety of configurations and is expected to provide a broader range of hyperkalemia treatment options. In certain situations, K+ontrol may be better suited to treat hyperkalemia than hemodialysis due to faster kinetics and ease of treatment that can be rapidly and easily implemented in places where the availability of dialysis is limited. These include far-forward or austere environments, where wounded warfighters must survive until they can be safely evacuated. Such solutions could also potentially be used to treat mass casualty victims from large scale natural disasters, such as earthquakes, fires, and landslides, as well as wars, terrorist attacks, and others.

Development of K+ontrol has been supported through SBIR contract funding by the U.S. ARMY SBIR and DEFENSE HEALTH AGENCY, and managed by the U.S. Army Medical Research and Materiel Command (USAMRMC).